In San Francisco, in the 20’s the scene was not Haight-Ashbury or North Beach. It was Telegraph Hill and the lower reaches of Montgomery Street, a block from Chinatown. There I met Yun Gee. He had a square-headed intensity, was hell-bent to revolutionize Chinatown and the world with modern art and, as this exhibition shows, he knew what it was and how to do it. The first sign of an emerging artist is that he recognize the ground current of his time. From Paris came the ground swell and Yun’s 20’s production grasped the color-structure implicit in the painting being done there at that time. They were not done after the fact. This is remarkable. He had no direct contact. De la Fresnaye, Lhote, etc., did it no better nor with more mastery. He began full-fledged. 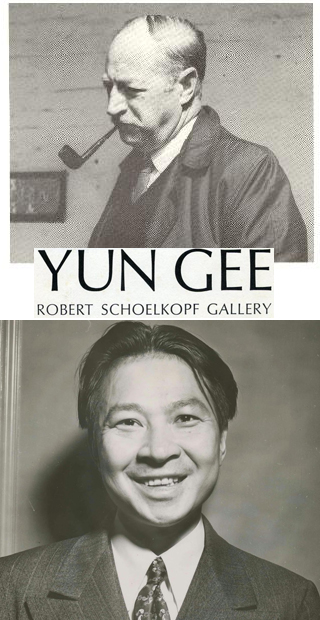 Admit genius and carefully place this young artist in context. In San Francisco the Mexicans then ran the roost. Rivera was god and more “modern” one could not be. The words “modern art,” now that the battle is won (lost again – won again, etc.) signify nothing today. Then they did, and the blank stare, apathy or violent rejection were real. One of two elders who had seen a Matisse encouraged Yun. (I remember they gave a party for Matisse when he came through on his way to Tahiti, but we weren’t invited.) MacDonald-Wright was somewhere about, but he was painting sexy Orientalia. (A pupil of his reviewed my first exhibition.) The omniscient Kenneth Rexroth was friend and counselor. Beyond that – silence.

Yun and I had a rapport; a topsy-turvy East vs. West relationship – which was which wasn’t always clear. We talked a lot and big. I left in 1930.

The rest is tragedy. I met him once in later life. He spoke confusedly. I thought he was drunk, or mad. Maybe he was – maybe he was – but it is to weep except for these pictures.