‘It’s so joyful and full of promise’: a modernism exhibition aims for hope • by Veronica Esposito • The Guardian

At a new exhibition at the Whitney in New York, a look back at early 20th-century modernist art offers optimism and also a rare diversity 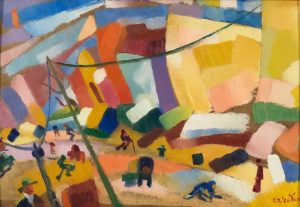 Although the dawn of the 20th century was a time of war, pandemic and social upheaval, it also brought with it an undeniable sense of hope and opportunity that was central to the modernist art that was flourishing at the time. Visionary new aesthetics were being unleashed on to the world, and artists truly believed in the revolutionary potential of their work. It is this unrivaled possibility, openness and optimism that the Whitney Museum’s new exhibit of modernist art, At the Dawn of a New Age, seeks to channel for museum-goers.

“There’s this sense of ebullience that registers in the work,” said the scholar and longtime Whitney curator Barbara Haskell, who organized this show. “It seemed that it would be fitting to showcase this work at a time when we’re dealing with the dystopia of the present day. I’m hoping to introduce the public to the range of quality and styles, the myriad ways that Americans translated what was happening in Europe to an American vernacular.”

True to Haskell’s aims, the show is a riot of colors, moods and styles, giving a sense of the heady experimentation at work as artists hewed out a distinctively American modernism. From neoclassical fantasia to sensual abstractions, radiant landscapes, transcendental visions, cubist street scenes and even a vintage set of the world’s predominant tarot deck, At the Dawn of a New Age presents a dizzying range of art. This profusion is somewhat tamed by being thoughtfully arranged into three galleries that offer visitors opportunities to pace themselves and tease out links between the pieces in a given room. 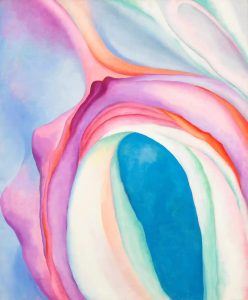 Haskell wanted her show to make a provocative counterpoint to the currently running Whitney Biennial. Thus, she combed through the museum’s archives to not just celebrate modernist standard-bearers like Georgia O’Keefe and Aaron Douglas but also showcase artists – often women and/or people of color – who have been largely erased from the modernist movement. Nearly half of the work in At the Dawn of a New Age has sat in storage at the Whitney for 30 to 50 years, and many of the pieces on display are new acquisitions meant to address gaps in the Whitney’s collections that Haskell to identified while piecing together her exhibition. “The history of this period tends to be told through a handful of artists, whereas the reality that so many artists were working at such a high level,” said Haskell. “This has denied us that ebullience, the sense of possibilities in the work. Bringing back these works really conveys that mood of the time.”

Among the less-celebrated artists given their due in At the Dawn of a New Age are Marguerite Zorach, Blanche Lazzell, Yun Gee, Isami Doi and Henrietta Shore. Arriving from all across the globe, and all throughout the United States, they were drawn to the modernist centers of New York and Paris by art that spoke to them with a sense of newness and promise. Channeling their creative impulses into this movement, they have created work that is at once recognizably modernist yet that remains true to their origins and the marginalized social spaces that they inhabited.

Zorach’s contribution to the show, a landscape painted on to silk simply titled Landscape with Figures, brings to mind Seurat’s A Sunday Afternoon on the Island of La Grande Jatte, for the sense of gathering and enjoyment that both convey. But Zorach’s stands on its own as a strange and compelling work: in the bending, flexing postures of the bathers there is a classic, neo-Greekness, and the piece’s central tree – composed of a radiant red trunk and lime green leaves – contributes to the otherworldly feel of the painting. As the work slowly soaks over your consciousness, it begins to feel as though these mysterious figures know secrets of pleasure and relaxation that few will ever penetrate. 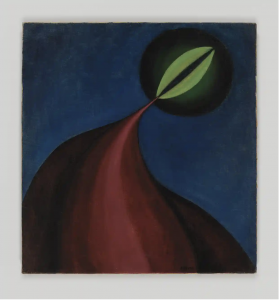 In contrast to Zorach’s ponderous landscape, Yun Gee’s Street Scene is composed at a vertiginous angle, giving the piece an off-balanced sensation. Consisting of large chunks of yellows, blues, reds and browns, the work owes debts to cubism and conveys a sense of the unruliness of modern life reminiscent of John Dos Passos. The aloneness and even desperation held by each of the teeming human figures in Street Scene feels purposeful, perhaps arising out of the racism that Gee experienced as a Chinese immigrant living and creating in San Francisco.

From bathers and cityscapes, one arrives at Henrietta Shore’s monumental flower, titled Trail of Life. Recalling the work of Georgia O’Keefe, with whom she exhibited (sometimes being the preferred of the two), it shows a simplified, abstracted flower bending with sensuous shapes. The work is among Haskell’s favorites in the show. “It’s almost this budding beginning of a flower. Shore applied multiple layers of paint, so the color just glows. I love how artists of this period are dealing with universal ideas about the interconnectedness between humans and nature, and Trail just codifies this idea of nature as a kind of container – if not something spiritual then at least communicating interiority.” 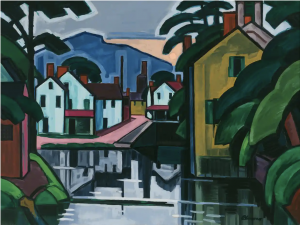 That interiority and interconnectedness is quite clear in the two haunting woodcuts by Isami Doi, a child of Japanese immigrants who grew up in Hawaii before pursuing art in Paris and New York. Carefully piecing together diverse textures and shapes, the woodcuts find a whole that is at once solemn and serene but also bursts with the energy of the natural realm. His Moonlight shows us the backs of two figures linked at the arm as they take a nighttime walk through foliage and toward houses in the distance. In the way the figures and their surroundings bend into one another, the connection between the human and the natural is potent. Doi’s The Stream offers a woman with downcast eyes standing pensively before a fence, behind which flows a stream. One longs to know what exactly comprises the stream of thoughts flowing through this woman’s mind.

At a time when the world can often feel so heavy, and when many are still weighing whether to fully re-engage with life, At the Dawn of a New Age offers a powerful reminder of exactly why we flock to museums. This hit parade of American dynamism and diversity is a welcome invitation to leave screens behind and bask in the presence of something transformative. “My very innocent goal would be that I hope people come to the show and fall in love with the work,” said Haskell. “It’s so joyful and so full of promise. Walking up into the galleries I have this sense of elation.” 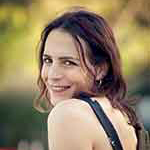 Veronica Esposito is a writer, editor and counselor in training based in California. She has worked with literary translation as a writer, editor, and publicist for well over a decade, and she is now earning a master’s degree in counseling while working in peer support and counseling. The author of four books, her publication credits include NPR, The Guardian, The New York Times, and many others. During 2020, she published a monthly interview series with World Literature Today on the future of translation.