A Glimpse of America by Sammy Preston

The perhaps unexpected works of art that defined a nation come together in an ambitious survey of American painting.

America: Painting a Nation at the Art Gallery of NSW presents an image of America that you might not have expected. The survey of painted works is small – the collection includes around 90 pieces spread across only a few rooms, but it captures some of the key milestones and sentiments from across the nation’s history, from colonisation to now. While there are no masterpieces here, the exhibition shows off lesser-known work by celebrated American artists like Georgia O’Keefe, James McNeill Whistler and Jackson Pollock, as well as an assortment of interesting pieces by a selection of less-familiar artists. With paintings sourced from LACMA in Los Angeles, the Philadelphia Museum of Art, the TERRA Foundation in Chicago and the Museum of Fine Arts in Houston, the exhibition works as a captivating glimpse of American history, outside of the most popular artwork usually selected to tell this story.

The first segments of the exhibition are focused on the formative years of America’s national identity – with works that show the beginnings of an American aesthetic, stalwarts of revolution and American Independence, and a developing patriotism. William Keith’s Yosemite Valley, John La Farge’s Paradise Valley and Thomas Moran’s Grand Canyon of the Colorado River show plains stretching out into an unfathomable distance, coloured by hopeful pale sunlight. Thomas Cole’s Landscape, the Seat of Mr Featherstonhaugh in the distance reveals his fervour for distinctive American scenery – a lake encircled by glowing red pines at late afternoon.

Paintings chronicling the early stages of national life include Thomas Waterman Wood’s The Yankee Pedlar and Eastman Johnson’s Southern Courtship (Johnson was one of the co-founders of The Metropolitan Museum of Art in New York). These are recognisable images of early Americana that endure within thousands of films – a group of African-American slave workers gathered around a banjo, and a white bearded man in a boater hat peddling a red wagon. However, the style of the work is distinctly European – a familiar picture of American life, but painted like a very Dutch Rembrandt. 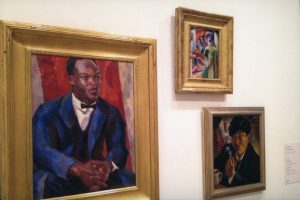 George Gershwin’s Rhapsody in Blue accompanies the paintings extracted from America’s roaring twenties. Dada-inspired Charles Demuth’s Welcome to our City depicts piled red roofs, overseen by a courthouse dome and some fragmented text, while Edward Hopper’s House at Dusk shows the artist’s signature city-glow (probably best known for his 1942 piece, Nighthawks). A trio of small works by Yun Gee, Miki Hayakawa and Otis Oldfield are a window into a very vibrant, bohemian San Francisco art scene – Gee and Oldfield formed the first artist’s cooperative in the Bay Area in the early ’20s.

The exhibition closes with a series of abstract contemporary pieces, drawn from 1950s New York. Hans Hofmann’s Blue Monolith shows thick strokes of blue to depict the vastness of the universe, while Adolph Gottlieb’s Penumbra is a black disc with a red halo, hovering over an exploding bulb – a simplified representation of visual tension: before and after, life and death or order and chaos. Californian artists have not been left out with a Robert Irwin installation guarding the exit – Untitled (1966 – 67) is a glowing white orb, casting four circular shadows.

(This essay appeared in BROADSHEET – SYDNEY) 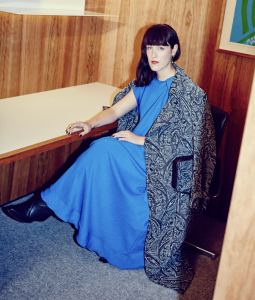 Sammy Preston is a writer, editor and curator living in Sydney, Australia.