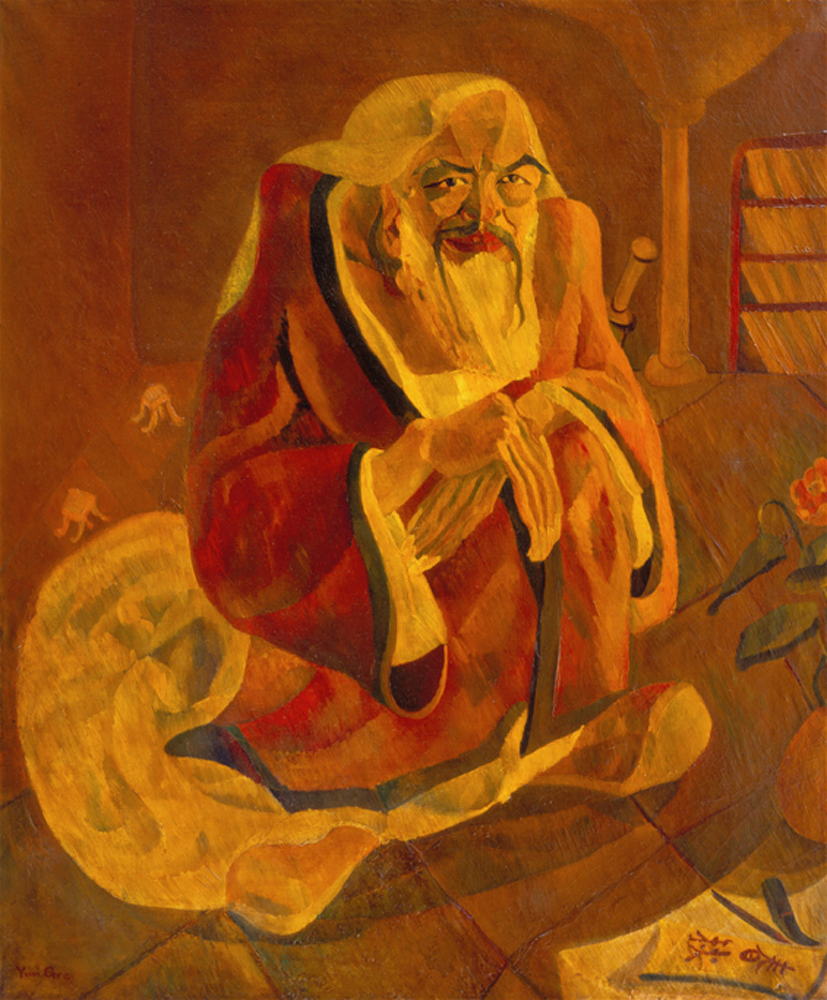 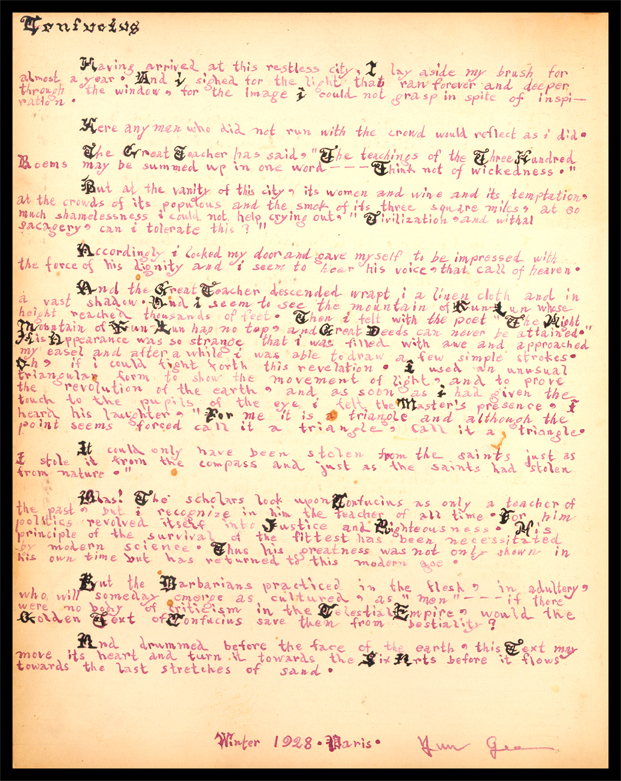 Having arrived at this restless city, I lay aside my brush for almost a year. And I sighed for the light that ran forever and deeper through the window, for the image I could not grasp in spite of inspiration.

Here any man who did not run with the crowd would reflect as I did. The Great Teacher has said, “The teachings of the Three Hundred Poems may be summed up in one word —Think not of wickedness.”

But at the vanity of this city, its women and wine and its temptations, at the crowds of its populous and the smoke of its three square miles, at so much shamelessness I could not help crying out, “Civilization, and withal savagery, can I tolerate this?”

Accordingly I locked my door and gave myself to be impressed with the force of his dignity and I seem to hear his voice, that call of heaven.

And the Great Teacher descended wrapt in a linen cloth and in a vast shadow. And I seemed to see the mountain of Kun-Lun whose height reached thousands of feet. Then I felt with the poet “The High Mountain of Kun-Lun has no top, and Great Deeds can never be attained.” His appearance was so strange that I was filled with awe and approached my easel and after a while I was able to draw a few simple strokes. Oh, if I could fight forth this revelation. I used an unusual triangular form to show the movement of light, and to prove the revolution of the earth, and as soon as I had given the touch to the pupils of the eye, I fell into a several hours’ faint. When I returned I still felt the Master’s presence, I heard his laughter, “For me it is a triangle and although the point seems forced call it a triangle, call it a triangle. It could only have been stolen from the saints just as I stole it from the compass and just as the saints had stolen it from nature.”

Alas! The scholars look upon Confucius as only a teacher of the past, but I recognize in him the teacher of all time. For him politics revolved itself into Justice and Righteousness. His principle of the survival of the fittest has been necessitated by modern science. Thus his greatness was not only shown in his own time but has returned to this modern age.

But the Barbarians practiced in the flesh, in adultery, who will someday emerge as cultured, as “men” — if there were no body of criticism in the Celestial Empire, would the Golden Text of Confucius save them from bestiality?

And drummed before the face of the earth, this Text may move its heart and turn it towards the Six Arts before it flows towards the last stretches of sand.

A Picture of Confucius

A Chinese painter, Yun Gee, whose exhibition was remarked on and who is now exhibiting at the Tuilleries a portrait of a poet, is finally settling in Paris, having left San Francisco, which honored him, and Italy, which also held him a moment, for the Mecca of living art.

A poet himself, more literate than in the Chinese sense, visionary and realist, Yun Gee, contemporary portraitist, has also given us a striking picture of Confucius. According to him, it is the true figure of the sage, the only one which can be proposed to the rare readers of the “Analects” and “The Mean.”