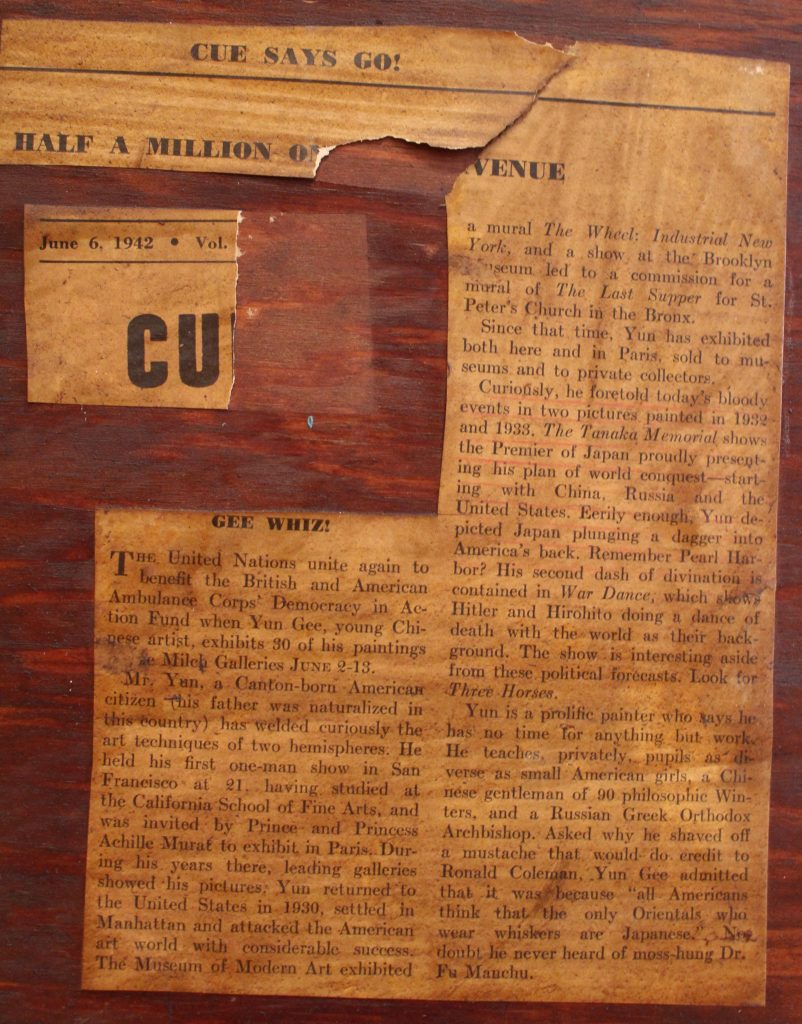 This article is most likely from Cue Magazine – June 6, 1942
(Cue Magazine was a weekly magazine the covered theatre and arts events in New York City from 1932 to 1980.)

The United Nations unite again to benefit the British and American Ambulance Corps’ Democracy in Action Fund when Yun Gee, young Chinese artist, exhibits 30 of his paintings at the Milch Galleries June 2 – 13.

Mr. Yun, a Canton-born American citizen (his father was naturalized in this country) has welded curiously the art techniques of two hemispheres. He held his first one-man show in San Francisco at 21, having studied at the California School of Fine Arts, and was invited by Prince and Princess Achille Murat to exhibit in Paris. During his years there, leading galleries showed his pictures. Yun returned to the United States in 1930, settled in Manhattan and attacked the American art world with considerable success. The Museum of Modern Art exhibited a mural The Wheel: Industrial New York, and a show at the Brooklyn Museum led to a commission for a mural of The Last Supper for St. Peter’s Church in the Bronx.

Since that time, Yun has exhibited both here and in Paris, sold to museums and to private collectors.

Curiously, he foretold today’s bloody events in two pictures painted in 1932 and 1933. The Tanaka Memorial shows the Premier of Japan proudly presenting his plan of world conquest – starting with China, Russia and the United States. Eerily enough, Yun depicted Japan plunging a dagger into America’s back. Remember Pearl Harbor? His second dash of divination is contained in War Dance, which shows Hitler and Hirohito doing a dance of death with the world as their background. The show is interesting aside from these political forecasts. Look for Three Horses.

Yun is a prolific painter who says he has not time for anything but work. He teaches, privately, pupils as diverse as small American girls, a Chinese gentleman of 90 philosophic Winters, and a Russian Greek Orthodox Archbishop. Asked why he shaved off a mustache that would do credit to Ronald Coleman, Yun Gee admitted that it was because “all Americans think that the only Orientals who wear whiskers are Japanese.” No doubt, he never heard of moss-hung Dr. Fu Manchu.