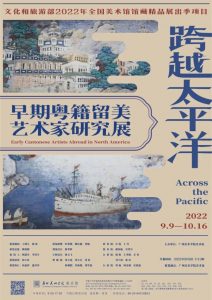 This is an exhibition of “Searching for the Origin of Art”. More than a hundred years ago, Guangdong gave birth to the first group of Chinese modern artists to travel across the ocean to study in the West. Some young Cantonese with artistic talents also moved to the other side of the Pacific Ocean to make a living or study art in Canada, the United States, Cuba and other places.

Among these Cantonese artists who went abroad to seek art, there were many famous masters who would have a profound influence on the Lingnan painting circle in the future, including Li Tiefu, Feng Gangbai, Guan Jinao, Yu Ben, Yun Gee and so on.

The learning experience in North America prompted them to form a unique artistic style. After returning to China, they spread the spirit of innovation to the art garden, participated in the “Chishe Art Research Association”, held the earliest Western painting exhibition in Guangdong, and prepared to establish the Guangzhou Municipal Academy of Fine Arts.  In addition, some Cantonese artists stayed in North America or traveled abroad and continued to explore in China and the United States, and carry out multiple attempts to integrate the East and the West.

In recent years, with the efforts of many experts, scholars, academic research and exhibition institutions, the three major sections of Cantonese artists from the early 20th century to the 1960s, who stayed in Japan, stayed in Europe and stayed in the Soviet Union, have been increasingly researched and exhibited.

However, because Cantonese artists who studied abroad in the United States went abroad earlier, some of them can be traced back to the second half of the 19th century, and most of them studied abroad as overseas Chinese instead of government-sponsored overseas students, so their deeds are in the wave of modern Chinese art and have become blurred and incomplete.

According to Li Tiejun, curator of the exhibition and director of the Exhibition Department of the University City Art Museum of Guangzhou Academy of Fine Arts, as the earliest known Chinese who went to the West to study oil painting and achieved profound attainments, Li Tiefu was once praised by Sun Yat-sen as “a giant in East Asian painting circles”, but the academic circle is still unclear about his early years of studying and living in Canada and the United States.

Not only is the experience of these artists traveling across the oceans and seeking art in other places far from clear, but what they did to the cause of modern Chinese art after returning to China is also unclear.

“Because of this, the unique artistic creation formed by their wandering between east and west has not attracted enough attention, and it is even unknown in the writing of Chinese and Western art history.” Li Tiejun added.

Now, these unfamiliar names are gathered together in this exhibition, and for the first time, the works of more than 20 Cantonese artists who studied in North America in the early stage appear together in a group appearance . It is the first time to be exhibited in a public art gallery in Mainland China.

According to the organizer, in order to restore the appearance of this special art group, this exhibition has joined forces with many art museums, research institutions and auction companies at home and abroad, focusing on the works of artists who have been able to collect early studies in North America, supplemented by relevant Cantonese overseas Chinese. Historical and cultural background materials, historical photos, newspaper reports and manuscripts and other documents and archives, as well as field survey data in overseas Chinese hometowns, try to reconstruct a more three-dimensional space-time network to sort out their positioning and significance in the modernization process of Chinese art.