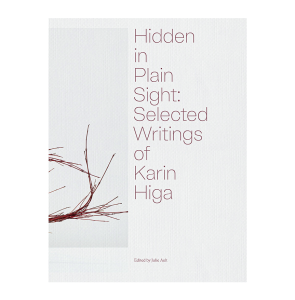 Edited by the renowned artist, curator, writer, and editor Julie Ault, Hidden in Plain Sight brings together essential writings by the art historian and curator Karin Higa (1966–2013). The selected essays, written between 1992 and 2011, focus on the creation of Japanese internment camps and the artistic production and communities that took root within them, as well as on the individual and collective narratives of Asian American artists in response to discriminatory immigration policies. While exploring issues of national identity and immigration, Higa recuperates significant artists and oeuvres from historical neglect and regards works by contemporary artists to examine how art acts as both a source for cultural identity and a transmitter of culture.

This book reveals how Higa’s conviction that art and the lived experience of the past are indissolubly linked was at the root of her methodological modeling of an Asian American art history. Moving between portrayals of milieux such as artists’ networks in the camps, Little Tokyo communities, and cities around the world—across ethnic, geographic, and stylistic boundaries—and case studies of oeuvres and biographies, she recovers vital art practices and hidden histories of creative struggle and efflorescence, in the process mapping individual practices, networks, and communal life, as fertile creative contexts. Higa shows how artists of Asian descent have moved past the divide between United States and their ancestral homes by using their freedom as artists to more broadly define their culture.

Karin Higa: Hidden in Plain Sight is the first in a two-part series highlighting the legacy of the late curator, writer, and cultural activist Karin Higa. This program will explore and celebrate the intersections of art, community and organizing in Higa’s work. This conversation, along with a second panel which will be held at the Hammer Museum on November 20, coincides with the publication of Hidden in Plain Sight: Selected Writings of Karin Higa, a substantial illustrated volume surveying her curatorial and scholarly work which will be released in October 2022 by Dancing Foxes Press.

Among her many accomplishments, Higa was senior curator at JANM from 1992-2006. Her creative, intellectual and political commitments to Asian American art, the Japanese American experience, the Little Tokyo community, and their deft interweaving with broader contexts, continue to be powerful inspiration for artists, art historians, and many other cultural workers.

Panelists include Howie Chen, curator and writer who recently edited the book Godzilla: Asian American Arts Network; Bruce Yonemoto, an artist who, along with his late brother Norman, worked very closely with Higa on the exhibition Bruce and Norman Yonemoto: Memory, Matter, and Modern Romance; and Julie Ault, editor of Hidden in Plain Sight: Selected Writings of Karin Higa. The panel will be introduced by Higa’s niece and recent JANM Getty Marrow Undergraduate intern, Rose Keiko Higa, and moderated by writer, curator, and organizer Ana Iwataki, who worked under Karin Higa as a JANM Getty Marrow Undergraduate intern.  – from Japanese American National Museum 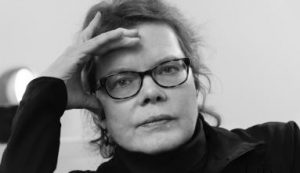 JULIE AULT
Julie Ault is an artist, curator, editor, and writer focused on mobilizing materials and information to animate histories of activism in art. Her projects include exhibitions, art writing, archiving and historical chronicles. Ault has edited, authored, and collaborated on over twenty publications; she is the editor of Hidden in Plain Sight: Selected Writings of Karin Higa (Dancing Foxes Press, 2022). Her recent exhibitions include Down the Rabbit Hole: JB in JT, James Benning exhibition arranged with Martin Beck in collaboration with O-Town House, Los Angeles (2020), and Paper Mirror: Nancy Spero at the Museo Tamayo, and MoMA PS1 (2018–19). Ault was a co-founder of the art collaborative Group Material, active from 1979 to 1996. She has been a MacArthur Fellow since 2018.