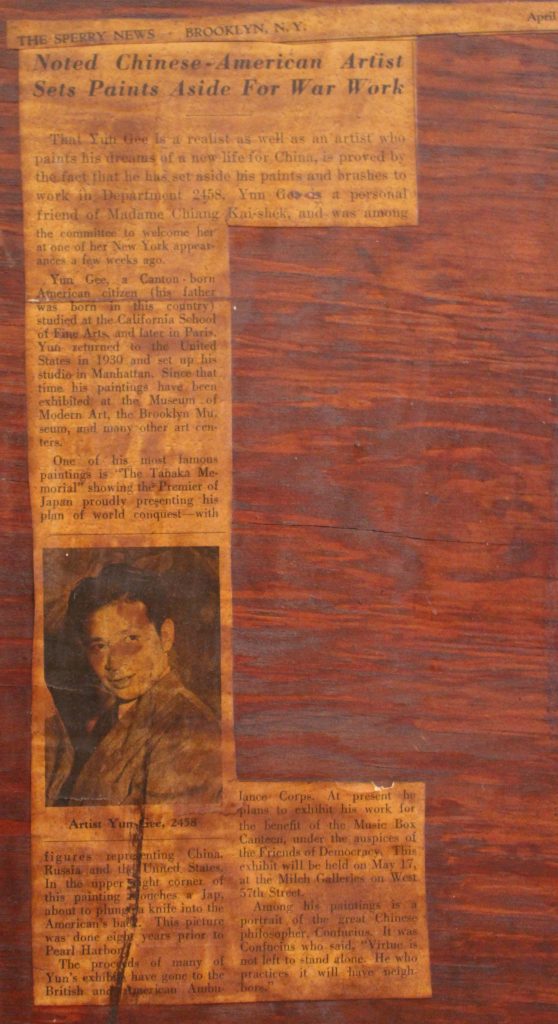 That Yun Gee is a realist as well as an artist who paints his dreams of a new life for China, is proved by the fact that he has set aside his paints and brushes to work in Department 2458. Yun Gee is a personal friend of Madame Chiang Kai-shek, and was among the committee to welcome her at one of her New York appearances a few weeks ago.

Yun Gee, a Canton-born American citizen (his father was born in this country) studied at the California School of Fine Arts, and later in Paris. Yun returned to the United States in 1930 and set up his studio in Manhattan. Since that time his paintings have been exhibited at the Museum of Modern Art, the Brooklyn Museum, and many other art centers.

One of his most famous paintings is The Tanaka Memorial showing the Premier of Japan proudly presenting his plan of world conquest – with figures representing China, Russia and the United States. In the upper right corner of this painting crouches a Jap, about to plunge a knife into the American’s back. This picture was done eight years prior to Pearl Harbor.

The proceeds of many of Yun’s exhibits have gone to the British and American Ambulance Corps. At present he plans to exhibit his work for the benefit of the Music Box Canteen, under the auspices of the Friends of Democracy. This exhibit will be held on May 17, at the Milch Galleries on West 57th Street

Among his paintings is a portrait of the great Chinese philosopher, Confucius. It was Confucius who said, “Virtue is not left to stand alone. He who practices it will have neighbors.”