A tousle-headed boy from Canton. An eager adolescent who came to San Francisco four years ago and now, at the age of twenty, joins the strivelings in art and follows his participation in the opening exhibit at the new Modern Gallery, in Montgomery street, with a one-man show that has attracted keen attention.

That is Yun. Yun what? we ask. “Just Yun – that is all the name that is really mine and belongs to me alone,” says this amazing youngster with the interesting accent and eager ideas.

And here the exhibition betrays its artist for its seventy-three pieces include drawings that should never have left the work-room, sketches useful only to the artist himself in the process of analysis or possibly, years later to the dealer who capitalizes on the indiscriminate worship given anything touched by a hand that has won fame for its master. These drawings are, for the most part, meaningless and vague – mere imaginative trailings. Exception to this damning is given in the case of the drawing called “Strollers,” a succession of broadside strokes that give a feeling of movement and rhythm.

Yun’s paintings, on the other had, are mostly well thought out even though many seem mere haphazard conglomerations at first. It is the essential feeling of design and the conscious placing of color that brings second glance meaning out of first sight chaos.

Yun calls his color tones “notes” in the music of his design. He earnestly insists that he paints a music that wells up from his heart. He points to a succession of warm color strokes and likens them to violin tones. He calls attention to other definite color placings and speaks of harmonies that he hears as he paints.

Whatever the mechanism, the results approach the studied design that forms the backbone of all true art and whatever the method, the end would seem to point toward a productive maturity.

At present, Yun is dominated by the ideal of the futurists. He conceives form as crystalline. He sees in surfaces not their own colors but the colors they reflect. Thus his “Venus – Blue Body” becomes a series of facets reflecting cold or warm light according to the plane each represents. The structure so achieved becomes intelligible and meaningful.

So, too, his “Sunday Morning” resolves itself, from being merely a pleasing pattern of color, into an interpretive study of figures on a park bench. And subtly but surely he has caught the emotional tone, the dull repose of the bench habitués. 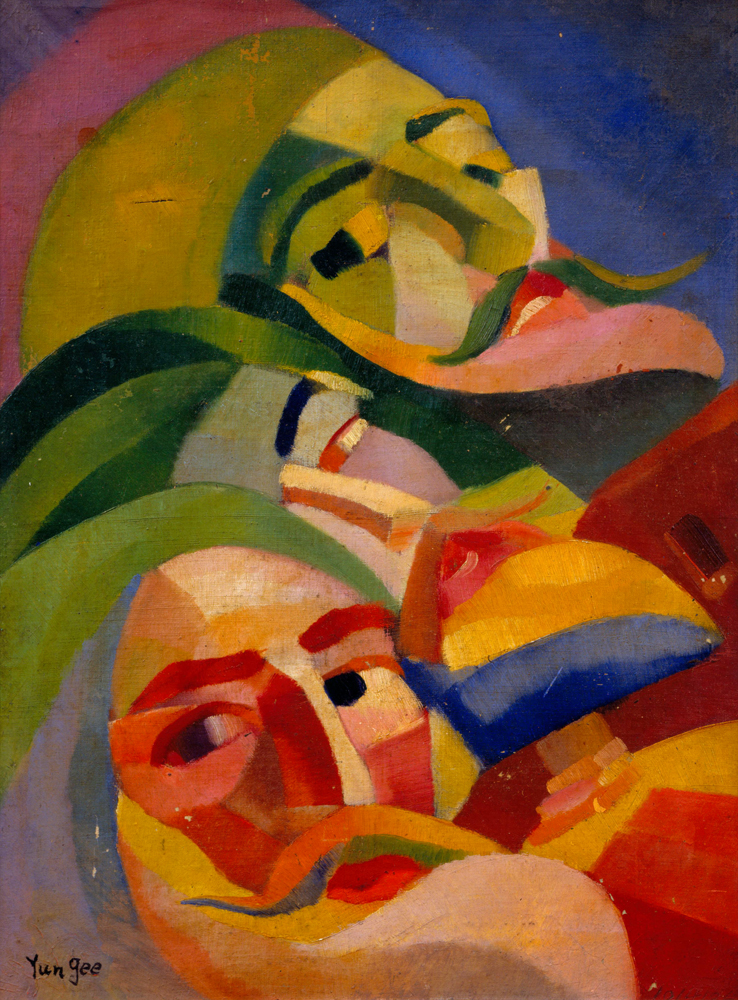 “My Impression of the Christ” was shown first in the group exhibit, along with the work of the nine other young artists who are sponsoring the Modern Gallery. It was heralded by the press as a synthetic representation. Some contended that it gave three aspects of the personality and labeled them respectively, Santa Claus, Shakespeare, and the conventional Christ. Yun disclaims any such intent, saying that the succession of heads in the composite picture is his way of showing vital movement, as he does not think of the Christ as ever static.

Visitors at the Gallery read cynicism and disillusionment into the painting but Yun approaches it reverently, almost worshipfully, for the coming of Christianity into his life was a momentous thing. He says that his first desire to paint came when, as a child, he wanted to make a picture of the Christ.

Yun claims to belong to no “school” of art. He attributes his art to no teacher or external influence. He would have us believe that he paints what he sees he way that he feels it. – as a child would put down his impressions. He would have us feel with him the “rhythm” of his heart.

And we smile – not unkindly nor in ridicule but merely because we remember – and we wonder what maturity will bring. 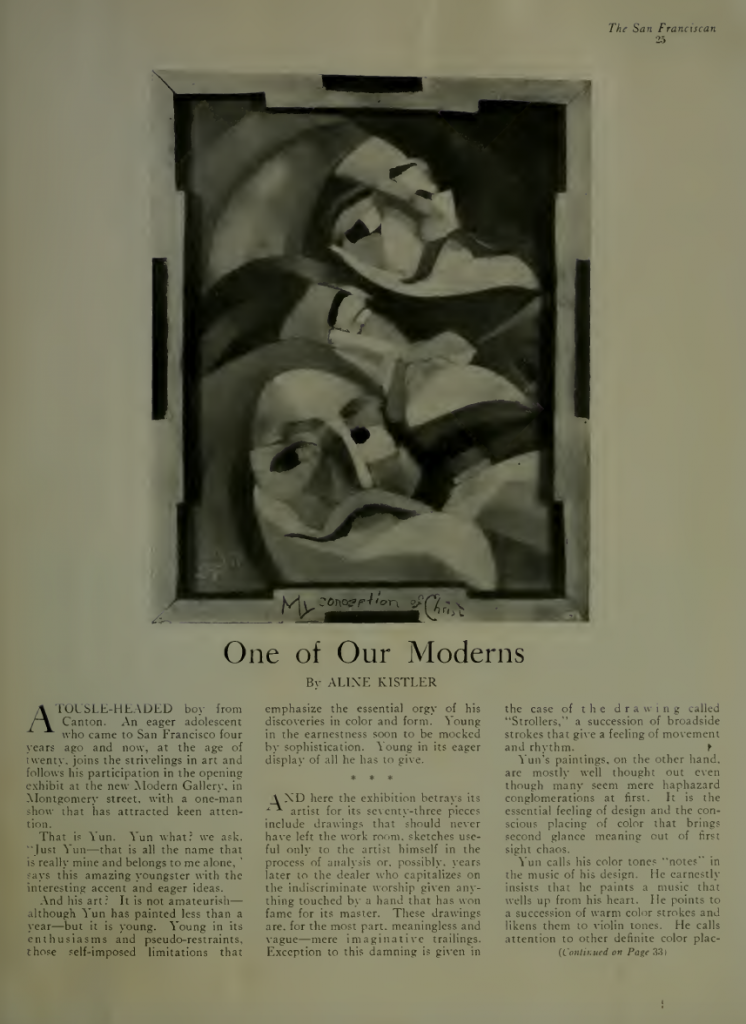 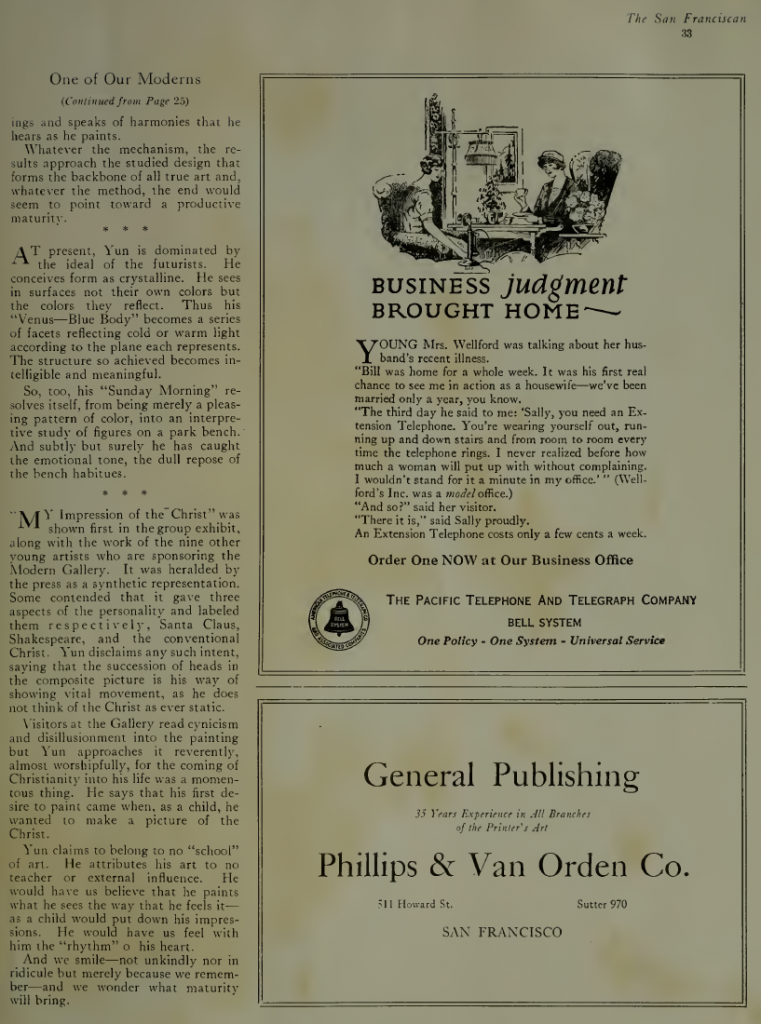