When an art museum reinstalls its permanent collection of paintings, sculptures and works on paper, perspectives can be freshened, recent scholarship given a platform and surprises unwrapped.

First: Does the name Cecil de Blaquière Howard ring a bell? If not, you’re not alone. Until last week, the artist was unknown to me.

But in the new installation on the third floor of the BCAM building, a small painted sculpture dated 1915 to 1917 stands on a pedestal between famous, powerhouse paintings by Henri Matisse (“Tea,” 1919) and Fernand Léger (“The Disks,” 1918-1919). Like them, that little sculpture, acquired by the museum two years ago, is marvelous.

Just 10 inches high, Howard’s sculpture is an abstraction of a Parisian café entertainer — a guitarist — pieced together from curved and jagged chunks of blond wood. The Cubist form is amplified and complicated with geometric shapes painted red, green, blue and black. A few simple, parallel black lines are added here and there to suggest elements as diverse as guitar strings, frets on the instrument’s neck and even the intense concentration of a musician’s furrowed brow.

Howard’s sculpture was made right after Pablo Picasso’s epic run of avant-garde paintings and constructions of guitars and guitar players and was surely executed with an awareness of them. The twentysomething Canadian-born American was then living in Paris, where thirtysomething Spanish-born Picasso was the talk of the town. What’s splendid about “Guitarist” is the distinctive way Howard integrates form and color to create an enchanting illusion of lively movement.

Speed, motion and rapid change were emerging as central to modern experience, and artists were exploring the dramatic perceptual change. How to achieve that in a static sculpture? Walk around the small object — Cubism visually demands that a viewer not stand still — and the painted shapes create a figure that seems to be energetically strumming his instrument, all poking elbows and bent knees.

In the painting hanging to the right of the Howard sculpture, Léger’s layers of brightly colored disks are like a bunch of waving semaphore flags, or maybe the clanging signs at a railroad crossing. Like the sculpture, it “moves” too, albeit to different ends.

In the Matisse to the left, two women enjoy the leafy garden in the dappled light of a sunny day, seated at a tea table set up beneath the trees. The artist’s daughter, Marguerite, idly dangles a shoe off her foot as she turns her head to look our way, almost as if she has heard our approach. The painting captures the head-turn like a snapshot.

To the left, dancer and violinist Henriette Darricarère, who would become the artist’s influential muse, stares straight ahead, poised and alert. Henriette could be looking through us to the bronze bust of herself in the next room, a sculpture Matisse made a decade later. Here, in the deft installation designed by LACMA curator Stephanie Barron and architect Frank O. Gehry, with assistant curator Katia Zavistovski, the bust is placed in the adjacent gallery so that a direct sightline is established between the two works of art.

Like “Guitarist,” although more subtly, Matisse employs a Cubist syntax to nudge us around the pedestal sculpture. A miracle happens: Henriette seems to age before our eyes.

From one view, the planes of her face are vibrant and taut, glinting in the light. From another side, the surface of her skin has begun to loosen, her jawline relaxes, reflected light softens. Motion here underlines the poignant passage of human time.

For years, Matisse had looked closely at his friend, and we benefit from doing the same. That’s one great thing about a museum’s permanent collection: Works stick around, affording the possibility for long-term looking.

Second surprise: Nearby, two small paintings made in California in the 1920s amplify the possibilities for discovery by artists who aren’t widely known. Miki Hayakawa (1899-1953) and Yun Gee (1906-63), immigrants to the Bay Area from Japan and China, respectively, and students together at the California School of Fine Arts, encapsulate a fractured, tumultuous period.

Hayakawa’s portrait of a handsome, dapper young Black man derives from the Postimpressionist technique of Paul Cézanne. Both the figure and its abstract space are chiseled from an orderly patchwork of short, considered brushstrokes.

An all-American palette of red, white and blue describes Hayakawa’s Black sitter at a moment when an accelerating movement in the United States is asserting demands for racial equality. “The New Negro,” philosopher Alain Locke’s influential anthology published the year before the painting was made, had national resonance for artists beyond New York City’s Harlem Renaissance.

Remarkably, Gee’s little painting hanging adjacent illuminates the multifaceted nature of that exact event. His “Artist Studio” lets us look over Hayakawa’s shoulder as she paints the portrait, the anonymous sitter posing beside her easel. Female, Black, Asian, immigrants — in a compact painting just 12 inches by 9 inches swirl the interwar contours of American racial and gender interests.

The Howard, Hayakawa and Gee were acquired a century after they were made. LACMA’s collection records aspects of both art’s modern history and the museum’s own story. What’s not to like about an extraordinary platform bearing nine Alberto Giacometti bronze sculptures, luxuriously displayed before a wall painted luscious aubergine?

Yet, five rooms earlier, the savvy installation opens not in Paris, the intense artistic milieu where the Swiss sculptor was drawn like so many others early in the 20th century, but in Germany and Eastern Europe. These often-discounted areas are where the collection is strong, and four decades of LACMA special exhibitions have made an indelible mark on writing Modern European art’s history. Like New York and L.A. after World War II, the tensions between powerful artistic centers, East and West, are manifest.

A subsequent gallery filled with 17 paintings and three sculptures by Picasso, made between 1903 and 1970, blasts out that artist’s rightful importance, together with Matisse, from the century’s beginning. Matisse is further represented by his five drop-dead bronze heads of “Jeannette” from 1910-16, a veritable textbook of abstraction’s evolution from straightforward description. What’s missing from the installation is Marcel Duchamp, the third of Paris’ early “big three.”

It’s not that LACMA doesn’t have any. A current general collection show in its Resnick Pavilion includes Duchamp’s 1916 “With Hidden Noise,” the famous industrial rattle assembled from an ordinary ball of twine held securely between two bolted metal plates. An unknown object secreted inside would make noise if the object were shaken — the mystery inside art.

The Duchamp is absent because LACMA is experimenting downstairs with the kind of temporary thematic presentations of the permanent collection planned for a controversial new building now under construction. But a major element of Modern art history upstairs gets lost in the shuffle. The BCAM installation is set for the foreseeable future, so what might happen with the Duchamp when the temporary theme show ends in July remains to be seen.

Let’s hope the sculpture is not destined for storage. One drawback of BCAM is that the available space is too small for the abundance of available Modern art. (The Abstract Expressionist gallery, for example, is crowded.) The David Geffen Galleries, LACMA’s new permanent collection building, will be smaller than what has been torn down to make way for it, which once again gives one pause.

Third surprise: Watts Towers is the first inarguably great work of art produced in Los Angeles. Sabato “Sam” Rodia started building the shell- and ceramic-encrusted environment next to the railroad tracks in 1921, and it has long been acknowledged as an influential impetus for assemblage art’s prominence among the city’s artists in the 1950s and 1960s.

But maybe there was something more.

Schwitters’ 1919 assemblage brings together busted wheels, parts of a flattened toy train, scraps of wood, shipping receipts and other found flotsam, all affixed to a large board painted in muted tones of brushy gray and umber. The tattered work, made in the wake of the Great War and the ongoing deadly ruin of influenza, is a monumental avowal of artistic freedom in rebuilding. From salvaged stuff, Schwitters would go on to build an entire environment in Hannover, inside of which he lived and worked, titling it with the nonsense word “Merzbau.”

LACMA acquired the extraordinary masterpiece in 1962, even before the art museum existed as an independent place. The assemblage was shown to great acclaim that year in an exhibition at the old Pasadena Art Museum.

Some museum installation sightlines are designed to visually draw a visitor through the galleries, as with the great Diego Rivera painting of a calla lily vendor seen framed by a doorway that pulls you into a room of Latin American Modernism, or the big Clyfford Still wall of jagged color, a good-though-not-great painting that yanks you into postwar American abstraction.

The Schwitters sightline is different. Leaving the new collection installation, I kept wondering: How many L.A. assemblage artists saw it in Pasadena?

Did a young Michael C. McMillen, an L.A. native who would have been about 16? Happily, a big, engrossing, 1981 environmental sculpture of a suburban tinkerer’s garage by McMillen has been reassembled for the occasion.

The date puts it pretty far outside the Modern collection’s advertised sweep of 1900 to the 1960s. Since it hasn’t been shown in a couple decades, I hardly mind — it’s that good.

Think of it as McMillen’s suburban Merzbau, picking up the broken pieces of America, post-Vietnam and -Watergate, as the reactionary Reagan era emerged. It’s bracing when a permanent collection mixes things up. 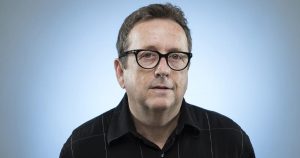 Los Angeles Times art critic Christopher Knight won the 2020 Pulitzer Prize for criticism (he was a finalist for the prize in 1991, 2001 and 2007). In 2020, he also received the Lifetime Achievement Award in Art Journalism from the Rabkin Foundation. Knight received the 1997 Frank Jewett Mather Award for distinction in art criticism from the College Art Assn., becoming the first journalist to win the award in more than 25 years. He has appeared on CBS’ “60 Minutes,” PBS’ “NewsHour,” NPR’s “Morning Edition” and “All Things Considered” and CNN and was featured in the 2009 documentary movie about the controversial relocation of the Barnes Foundation’s art collection, “The Art of the Steal.”