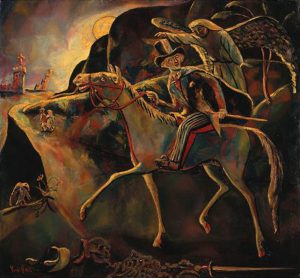 The Right Route To Freedom painted by the Chinese American idealist Yun Gee, is an outstanding painting symbolizing the readjustments of mankind after the tragedy of war. In his painting Yun Gee shows America, a leader of Nations, on horseback, and directly above him an angel pointing out to him the right road, that road glorified by the light of hope and freedom, that road which he must tread in order that the smaller nations will follow in his path, and in a lesser measure try to forget the destructions of war. Besides this symbolism in the painting, Yun Gee has proven himself a man of remarkable artistic ability. In every painting that Yun Gee has done he has not only strived to make it a work of art, but also to convey a message to the public in general, hoping to achieve in this way his mission in life, that of spreading the doctrines of liberty through out the world. The light and movement in his most recent painting The Right Route To Freedom reminds one quaintly enough, of a great painter of the seventeenth century, El Greco. Yun Gee with his artistic ability combined with his intense desire for freedom, makes him a truly outstanding artist of our time.