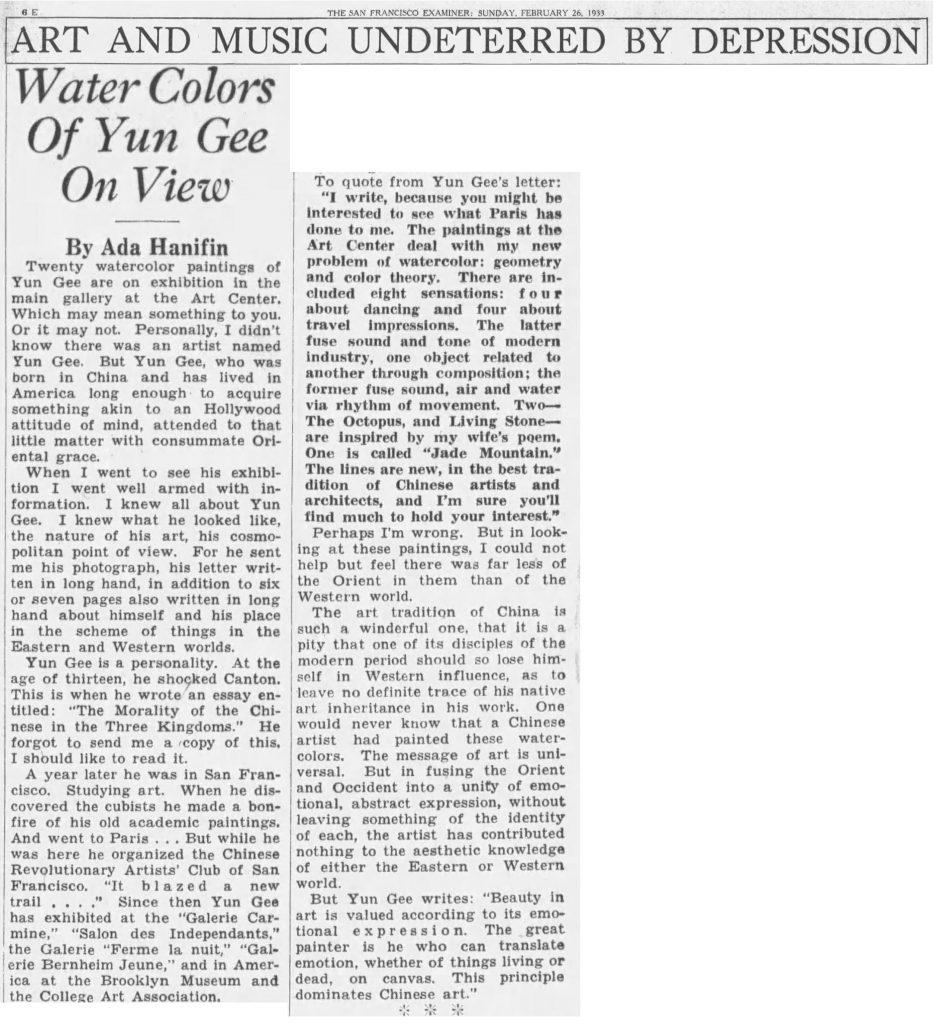 Water Colors Of Yun Gee On View
By Ada Hanifin

Twenty watercolor paintings of Yun Gee are on exhibition in the main gallery at the Art Center. Which may mean something to you.  Or it may not.  Personally, I didn’t know there was an artist named Yun Gee.  But Yun Gee, who was born in China and has lived in America long enough to acquire something akin to an Hollywood attitude of mind, attended to that little matter with consummate Oriental grace.

When I went to see his exhibition I went well armed with in formation.  I knew all about Yun Gee.  I knew what he looked like, the nature of his art, his cosmopolitan point of view.  For he sent me his photograph, his letter written in long hand, in addition to six or seven pages also written in long hand about himself and his place in the scheme of things in the Easter and Western worlds.

Yun Gee is a personality.  At the age of thirteen, he shocked Canton.  This is when he wrote an essay entitled: “The Morality of the Chinese in the Three Kingdoms.”  He forgot to send me a copy of this.  I should like to read it.

A year later he was in San Francisco.  Studying art. When he discovered the cubists he made a bonfire of his old academic paintings.  And went to Paris. . . But while he was here he organized the Chinese Revolutionary Artists’ Club of San Francisco.  “It blazed a new trail . . . ”  Since then Yun Gee has exhibited at the “Galerie Carmine,” “Salon des Independants,” the Galerie “Ferme la nuit,” “Galerie Bernheim Jeune,” and in America at the Brooklyn Museum and the College Art Association.

I write, because you might be interested to see what Paris has done to me.  The paintings at the Art Center deal with my new problem of watercolor: geometry and color theory.  There are included eight sensations: four about dancing and four about travel impressions.  The latter fuse sound and tone of modern industry, one object related to another through composition; the former fuse sound, air and water via rhythm of movement.  Two – The Octopus, and Living Stone – are inspired by my wife’s poem.  One is called “Jade Mountain.”  The lines are new, in the best tradition of Chinese artists and architects, and I’m sure you’ll much to hold your interest.

Perhaps I’m wrong.  But in looking at these paintings, I could not help but feel there was far less of the Orient in them than of the Western world.

The art tradition of China is such a wonderful one, that it is a pity that one of its disciples of the modern period should so lose himself in Western influence, as to leave no definite trace of his native art inheritance in his work.  One would never know that a Chinese artist had painted these watercolors.  The message of art is universal.  But in fusing the Orient and Occident into a unity of emotional, abstract expression, without leaving something of the identity of each, the artist has contributed nothing to the aesthetic knowledge of either the Eastern or Western world.

Beauty in art is valued according to its emotional expression.  The great painter is he who can translate emotion, whether of things living or dead, on canvas.  This principle dominates Chinese art.