Yun Gee part of At the Dawn of a New Age: Early Twentieth-Century American Modernism at Whitney 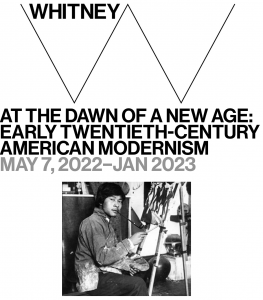 PRESS RELEASE:
AT THE DAWN OF A NEW AGE: EARLY TWENTIETH-CENTURY AMERICAN MODERNISM OPENS AT THE WHITNEY ON MAY 7

The exhibition brings together works by both familiar and lesser-known artists to explore the myriad ways American artists employed abstraction to convey their experiences of modernity.

New York, March 17, 2022 — The Whitney Museum of American Art presents At the Dawn of a New Age: Early Twentieth-Century American Modernism, an exhibition of over sixty works by more than forty-five artists that highlights the complexity of American art produced between 1900 and 1930. The exhibition showcases how American artists responded to the realities of a rapidly modernizing period through an array of abstract styles and media. At the Dawn of a New Age features artworks drawn primarily from the Whitney’s collection, including new acquisitions and works that have not been on view at the Museum for decades. The exhibition provides a broader perspective on early twentieth-century American modernism by including well-known artists like Marsden Hartley, Oscar Bluemner, Elie Nadelman, Charles Burchfield, Aaron Douglas, and Georgia O’Keeffe, as well as groundbreaking, historically overlooked artists like Henrietta Shore, Charles Duncan, Yun Gee, Manierre Dawson, Blanche Lazzell, Ben Benn, Isami Doi, and Albert Bloch.

At the Dawn of a New Age: Early Twentieth-Century American Modernism is organized by Whitney Curator Barbara Haskell and is on view in the Museum’s eighth-floor Hurst Family galleries from May 7, 2022, to March 2023.

America’s early modernists came of age in a period marked by change and innovation. The onset of the twentieth century saw technological advancements combined with cultural shifts, including women’s suffrage and progressive political initiatives, that challenged existing social and economic norms. Against this backdrop of optimism in progress and modernity, many American artists embraced the new and experimental over the traditional and fixed by rejecting realism in favor of art that prioritized emotional experience and harmonious design.

“In the Whitney’s early days, the Museum favored realism over abstract styles,” said Curator Barbara Haskell. “It wasn’t until the mid-1970s that the Museum expanded its focus and began acquiring nonrepresentational works from the period. Gaps remain, but the Museum’s holdings of early twentieth-century modernism now rank among the collection’s strengths. By bringing together familiar icons, works that have been in storage for decades, and new acquisitions, At the Dawn of a New Age gives us an opportunity to reassess how we tell the story of this period of American art and celebrate its complexity and spirit of innovation.”

“At the Dawn of a New Age provides an opportunity to reconsider and expand interpretations of American modernism in the early 1900s through the unique lens of the Whitney’s collection,” said Jane Panetta, the Whitney’s Nancy and Fred Poses Curator and Director of the Collection. “This show presents an exciting moment for us to feature new acquisitions from pioneering artists of that time, some of whom recently entered the Whitney’s collection for the first time. We’re thrilled to bring these works into the collection as we begin to address how the Whitney can continue to build upon our important holdings from this period.”

At the Dawn of a New Age features paintings, drawings, sculptures, prints, photographs, and woodcuts, revealing the variety of styles and media that artists used to express their experiences of modern life. Early explorations from well-known modernists, such as Georgia O’Keeffe’s Music, Pink and BlueNo. 2 (1918) and Marsden Hartley’s Forms Abstracted (1914), are presented alongside works by previously overlooked figures, in particular women and artists of color, that are critical to expanding the Museum’s representation of this period. From the flat, stylized geometries of Aaron Douglas and Isami Doi to the simplified organic abstractions of Henrietta Shore and Agnes Pelton and the Symbolist landscapes of Pamela Colman Smith and Albert Bloch, the artists featured in the exhibition channeled vanguard European art styles into a distinctly American brand of modernism.

Exhibition Support Generous support for At the Dawn of a New Age: Early Twentieth-Century Modernism is provided by the Barbara Haskell American Fellows Legacy Fund.

Significant support is provided by Amy and David Abrams, Laurie M. Tisch, and public funds from the New York City Department of Cultural Affairs, in partnership with the City Council.

About the Whitney
The Whitney Museum of American Art, founded in 1930 by the artist and philanthropist Gertrude Vanderbilt Whitney (1875–1942), houses the foremost collection of American art from the twentieth and twenty-first centuries. Mrs. Whitney, an early and ardent supporter of modern American art, nurtured groundbreaking artists at a time when audiences were still largely preoccupied with the Old Masters. From her vision arose the Whitney Museum of American Art, which has been championing the most innovative art of the United States for ninety years. The core of the Whitney’s mission is to collect, preserve, interpret, and exhibit American art of our time and serve a wide variety of audiences in celebration of the complexity and diversity of art and culture in the United States. Through this mission and a steadfast commitment to artists, the Whitney has long been a powerful force in support of modern and contemporary art and continues to help define what is innovative and influential in American art today.