Artist, poet and musician, Yun Gee led a life marked by both critical acclaim and struggle, but he never wavered from his aesthetic or philosophical ideals. 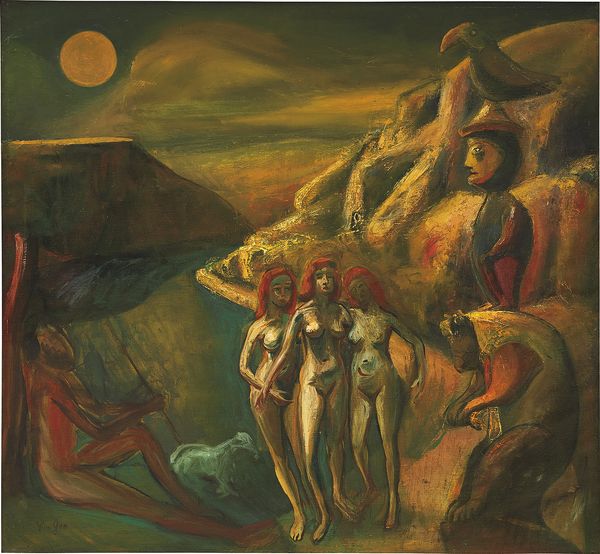 Yun Gee penned “The Chinese Artist and the World of Tomorrow” in the mid-­1920s, a few years after settling in America. In it, he proposed two goals for his contemporaries: embrace Western influences in order to make Chinese art more universally relevant for the twentieth century and promote Chinese philosophical principles for the general betterment of the world. It also offers a template for Yun Gee’s career.

Yun Gee was inspired by traditional Chinese painting, such as the above example, Shaded Dwellings Among Streams and Mountains, painted by Dong Qichang in the 17th Century.

Yun Gee was born in 1906 in Guangdong, where he received his early education. It may have been there that he first encountered the ideas of Gao Jianfu (1879-1952) and Gao Qifeng (1889-1933), who advocated modernizing traditional Chinese painting (guohua) and imbuing it with a political agenda. The brothers’ strong commitment to revolutionary change can be seen in the young Yun Gee’s ideas. Gee emigrated to America in 1921, at age 15, and settled in San Francisco where his father was already residing. He enrolled at the California School of Fine Arts in 1925, and the following year had his first solo exhibition of colorful Cubist-inflected works. That same year, Yun Gee founded the Chinese Revolutionary Artists’ Club, a venue for teaching painting and espousing his ideas about the importance of a universal modernist art with both aesthetic appeal and social consciousness.

Although Yun Gee spent most of his adult life in the United States, he twice journeyed to Paris for extended stays: in 1927-­30 and 1936-­39. Encouraged by his success in San Francisco and the urgings of new French patrons, Yun Gee felt ready for a more challenging artistic arena. He found Paris exhilarating, and recognition came quickly. Within a year of arriving, a solo exhibition was followed by group shows at the Salon des Indépendants and marked Yun Gee as a rising star. His work was shown alongside that of Georges Braque, Raoul Dufy and Chaim Soutine and received positive reviews. He also met many influential figures of the Parisian avant-­garde, like Gertrude Stein and Ambroise Vollard.

The global economic recession altered Yun Gee’s Paris plans. In 1930, he left Paris for New York. Despite the hardships of the Great Depression, Gee worked incessantly. His paintings, often depicting New York scenes, were featured in gallery shows, the Brooklyn Museum of Art, and the Museum of Modern Art (MoMA). (Wheels: Industrial New York, 1932, and two other paintings were included in Murals by American Painters and Photographers, the inaugural exhibition for the opening of MoMA’s new building). Still, Yun Gee found himself disillusioned with opportunities in New York and increasingly mindful of the racism he encountered. He returned to Paris in 1936. This time, the deteriorating geopolitical situation of Europe in the 1930s cut his journey short, and he returned to New York in 1939 at the outset of World War II. 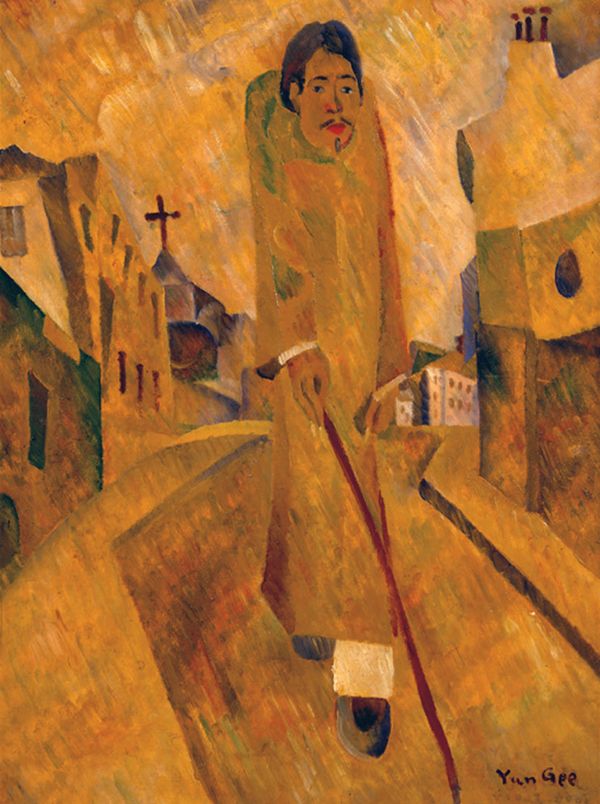 The years in Paris had an undeniable influence on Yun Gee’s development, both artistically and in terms of how he saw himself. Works from the late 1920s turned more introspective. In place of the colorful portraits and landscapes of his San Francisco period, Gee’s palette darkened, and he seemed to be in search of an identity — racially, culturally and artistically. He painted images from Chinese history and philosophy, and also portrayed himself as a Chinese painter in Paris. In How I Saw Myself in a Dream, from around 1929, Gee walks along a deserted Parisian street, dressed in the long gown and cloth shoes of a Chinese scholar. A solitary figure, set in a composition of strong diagonals and deep colors, offers an extraordinary glimpse of the artist’s burgeoning identity and recognition of his inner struggle as a Chinese artist in a foreign land.

Paris also exposed Yun Gee to current trends in art. He encountered modernist trends: Cubism, Fauvism, Synchromism and Futurism. He explored Western artistic traditions in Paris’ many museums, especially the Louvre. In “East and West Meet in Paris,” he wrote, “When I visited the Louvre day after day, the masterpieces there spoke to me in a language which was neither French nor Chinese, but which transcended time and place.” Perhaps it was at the Louvre that Yun Gee first encountered the art of classical antiquity and images of the Three Graces. During the Renaissance, artists revived the theme, with the three goddesses becoming an embodiment of female beauty and charm. Modern artists continued to depict them: paintings by Robert Delaunay (1912) and Pablo Picasso (1925), for example, adapted the theme with distinctive modernist interpretations. 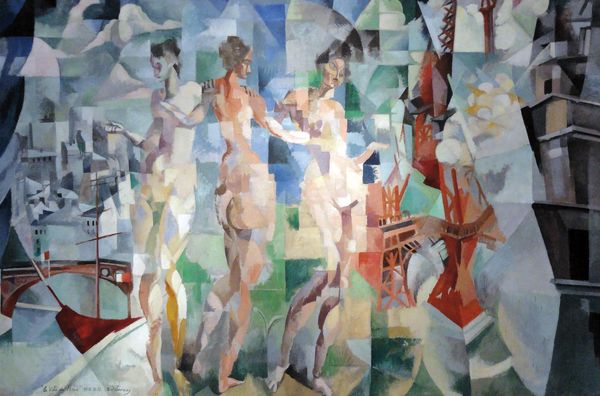 Yun Gee painted Three Graces upon his return to New York in 1939. He offers a oneiric narrative, laden with symbols and allusions understood only by the artist himself — and maybe not even fully by him. Three nudes stand at the center of the composition in a fantastical landscape setting and surrounded by fanciful creatures. In 1939, Gee had been experimenting with entwined groups of female figures. The figures in Knights Combat, for example, are painted in lively poses, their arms outstretched and intertwined, and suggestive of the ancient theme.

The Graces at the center of this dramatic composition are not alone. Yun Gee placed them within an otherworldly landscape, bathed in the glow of moonlight and flanked them with unusual figures. Another classical allusion, in the form of a faun, appears to the left. This mythical creature, often shown in its half‐human, half-­goat form, here reclines against a rocky outcropping, as the spectral image of one of his flock hovers nearby. More commonly depicted frolicking in a wooded setting, the faun holds a slender flute, as he appears to keep a watchful eye on the Graces. Yun Gee once painted a self-­portrait playing a flute, and perhaps the faun here is a mischievous reference to the artist himself. 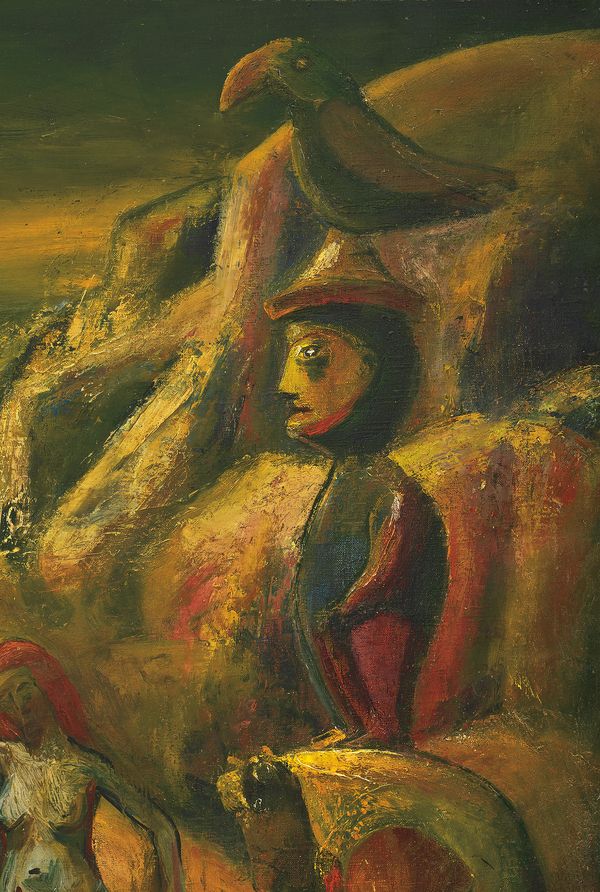 Right side detail from Three Graces by Yun Gee

Abstract figures — human and animal — dominate the right side of the canvas. A male, dressed in costume, wears a hat on which perches a large black bird. Before him stands an unusually imagined sheep. Both figures deepen the mysterious mood of the painting. The influence of Surrealism, with its perplexing imagery, and Expressionism, with its distortions and emotional origins on Yun Gee, is evident. Freud’s theories of dreams may play a role, as well. Freud saw dreams as an expression of the unconscious; the symbols in dreams denoted urges and impulses repressed by the conscious mind. Three Graces does, indeed, suggest an extraordinary dreamscape of the mind with Gee giving shape to a private inner vision.

Alongside a mixture of Western imagery and modernist styles, the work also evokes the elements of Chinese painting. Yun Gee’s ties to China and Chinese culture remained strong throughout his life, and during his years in New York, he contributed paintings and cartoons to benefit social and political causes back home. In Three Graces, Yun Gee abandoned the modulated line of Chinese painting in favor of rougher, more staccato brushwork. But within the composition itself are vestiges of the Chinese painting tradition. For instance, the furrowed hills recall similarly lumpen forms in paintings by Huang Gongwang (1269-­1354) and Dong Qichang (1555-­1636). Echoing a compositional device common in Chinese painting, a path zigzags from the foreground into the distance beyond, drawing the viewer’s eye into a swirling atmospheric rendering of the unknown.

When I visited the Louvre day after day, the masterpieces there spoke to me in a language that was neither French nor Chinese but which transcended time and place. Here was something universal which had meaning for every man regardless of race or state. A painting by Cezanne or Courbet became as close to me as any of the scrolls by the Chinese masters with which I was so familiar. And I realized that East and West were not so far apart, for in their finest creative effort, there was something very much akin. I settled down in Paris to achieve this aim. — Yun Gee

Yun Gee’s career was marked by restlessness, of both body and spirit. He moved frequently in search of a community where race and ethnicity were not liabilities, and where his many talents might be fully appreciated. The intricacies of his artistic vision are on full display in Three Graces. Layers of influence — antiquity, Modernism, Surrealism, Freud and China — define Yun Gee’s art.

His passions were many, as were the ways he expressed them. Yun Gee occupied a unique position. The world he negotiated in his life and art was territory defined by the disparate poles of Chinese culture and Western modernism. Yun Gee was an early voice in the creation of a global language of modernism, and a pioneer in the establishment of a unique aesthetic.

Phillips wishes to thank Professor Melissa Walt for the writing in this essay.