An Over-Two-Metre Tall Museum Piece Created For The Reopening Show of MoMA In 1932
Fresh To The Market After 85 Years, Direct From The Collection of The Artist’s Family 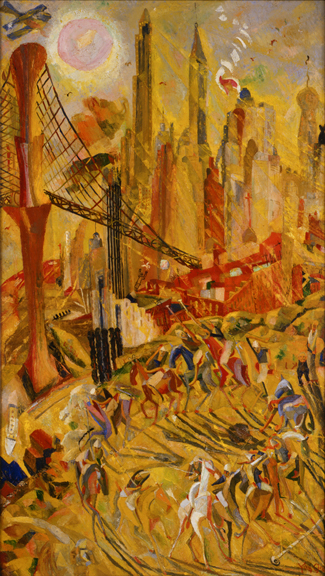 Hong Kong, 11 September 2017 At the Modern and Contemporary Art Evening Sale on 30 September, Sotheby’s is honoured to present Yun Gee’s Wheels: Industrial New York, the most significant work from the Chinese-American artist’s illustrious career. Standing at over two metres tall, the painting is not only Yun Gee’s largest work in terms of its physical dimensions, it is also the creation in response to the invitation to the reopening show of New York’s Museum of Modern Art (MoMA) in 1932, making Yun Gee the first Chinese artist to exhibit at the world-famous institution. This momentous invitation, and subsequent masterpiece, established a significant milestone for both the artist and Chinese Modern art at large. Wheels: Industrial New York is estimated at HK$80million – 120 million/ US$10million – 15million*.

Vinci Chang, Sotheby’s Head of Modern Asian Art, commented, “Considered the ‘father’ of Chinese Modern art, the significance of Yun Gee is indelible, and hence Sotheby’s has long been cultivating the market for his works. In 1992, we were the first international auction house to introduce Yun Gee to the market. Later, in October 1999, we curated the artist’s first thematic sale: ‘Helen’s World of Yun Gee’. Sotheby’s currently leads the way in the number of his works sold, including four among his top five selling pieces. Direct from the collection of the artist’s family, Wheels: Industrial New York is appearing on the market for the very first time since its creation 85 years ago.” 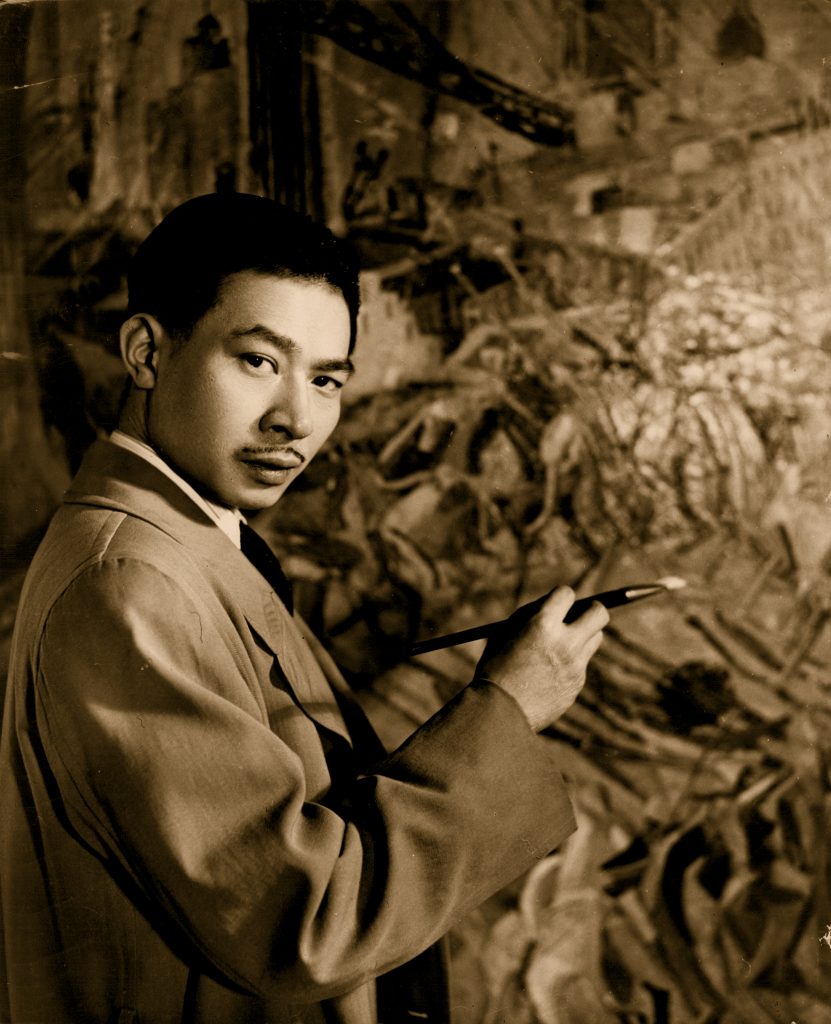 Yun Gee: From China to the World

The pioneering Chinese-American artist Yun Gee lived a full and varied life. Born in China but raised in California, he studied at the California School for Fine Arts, where he met his mentor Otis Oldfield and became heavily influenced by Sychronism. Things moved quickly from there for the young artist: in 1926, at the age of 21, Yun Gee held his first solo exhibition with resounding success, leading to an invitation to France from Prince and Princess Achille Murat. During his three years in Paris, Yun Gee became acquainted with various intellectuals and the artists from the École de Paris, while also staging his solo exhibition at the reputable Galerie Bernheim-Jeune. In 1930, the sudden onset of the Great Depression brought this momentum to a halt, as Yun Gee decided to leave behind his young wife, Princess Paule de Reuss, for a new chapter in New York.

From China to the great cities of San Francisco, Paris and New York, the artist’s journey granted the artist a wealth of profound life experience and a broad international perspective which determined his unique career. After joining the vibrant, international art scene during inter-war Paris as a Chinese artist, Yun Gee soon became a pioneer in the American system, where he made significant contributions to the development of American Modernism. Such achievement was unprecedented at the time considering the anti-Chinese sentiment in American society. 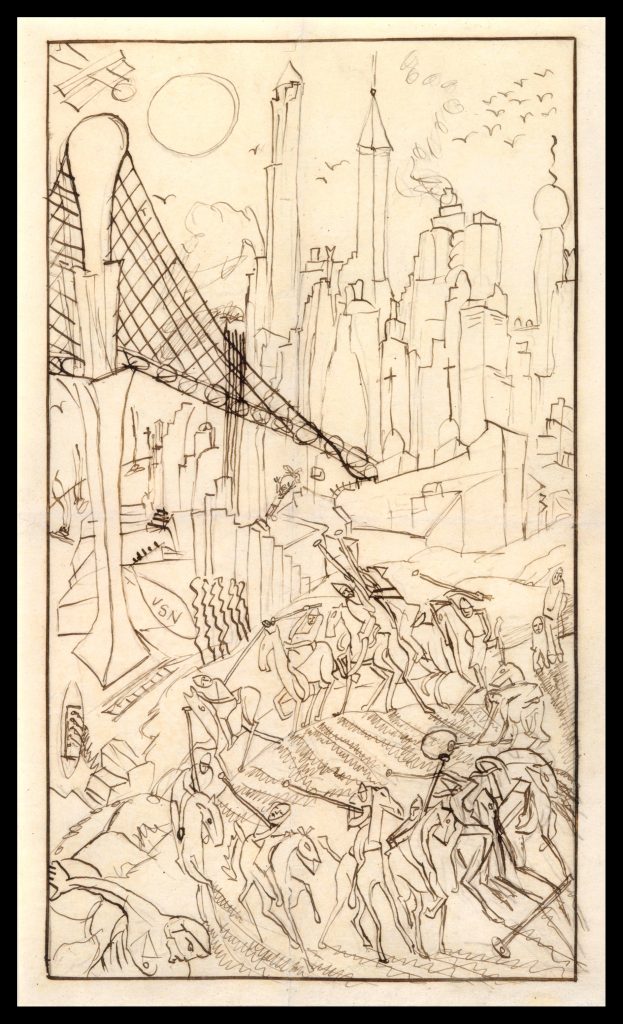 Sketch of Wheels: Industrial New York
1932
pencil on paper
An Invitation from the Museum of Modern Art

In 1932, New York’s Museum of Modern Art (MoMA) relocated to its current address on 53rd Avenue. To showcase the creativity of local American artists, a total of 65 artists of American nationality or citizenship were invited to submit works for the inaugural exhibition, ‘Murals by American Painters and Photographers.’ Since Yun Gee had joined his father in the United States at a young age, he was qualified to participate in this historic opportunity, making him both the youngest artist and, more crucially, the only one of Asian descent.

The exhibition, chaired by Lincoln Kirstein, was themed ‘The Post-war World,’ for which each artist had six weeks to deliver a triptych and a work of large dimensions (4 x 7 feet). Yun Gee took the opportunity seriously, refusing all visitors in order to be able to dedicate himself fully to the task. This period of single-minded exertion yielded two of the artist’s major works: a triptych entitled Merry-Go-Round; Sun Bathers; Modern Apartment ^, and this monumental work of even greater significance: Wheels: Industrial New York.

After the exhibition, Wheels: Industrial New York was sent on a national tour. Among the selected artists on the tour were a number of highly-regarded figures, including Georgia O’Keeffe – otherwise known as ‘the mother of American Modern art’ – whose Manhattan is now kept in the Smithsonian American Art Museum; and well-known Modern artist Davis, whose New York Mural was later kept and displayed at the New York Whitney Museum of American Art.

The Roaring Twenties propelled New York to be the world’s most dazzling metropolis. In Wheels: Industrial New York, Yun Gee saluted the triumph of this capital: the swooping biplane recalling America’s military and scientific prowess, the faint tendrils of smoke rising from the factory chimneys, the exertion Brooklyn Bridge, the countless ships and the towering skyscrapers – all indicating America’s rapid industrialisation and modernisation since the Great War.

An important element of this immense painting is the circle of polo-playing entrepreneurs. In portraying it, Yun Gee employed perspective and shadow to great effect, creating a ying-yang fish symbol akin to the Chinese taichi emblem for oneness. The wheel-like movement of the polo team represents the life and beating heart of modern Utopia that is the United States of America.

Underneath the admiration and awe, the painting also consists of some foreboding signs on America’s deepening socio-economic crisis of 1930s: the sun is waning towards the West – an indication that the sun may be setting on such unrestrained prosperity; the wheel-shaped polo team brings to mind the twelve disciples of the Christian faith, who are often portrayed as flawed characters, thus discrediting any notion of harmony within the group; dressed in a fashion akin to the Crusaders of the Middle Ages, they bring with them the implication of the Janus-faced ways in which American entrepreneurs created immense wealth through the exploitation of the working classes. Finally, an ancient Greek discus thrower marginalised at the lower left-hand corner forms a smaller circle of its own, in contrast with the wheel of entrepreneurs. One cannot help but sense his solitude and helplessness, perhaps a suggestion that America was cornering its own cultural roots in exchange for its global dominance.

The birth of Wheels: Industrial New York also epitomised the gradual development of Yun Gee’s theory of ‘Diamondism’ – a reconciliation of the bold and rhythmic Synchronism from his early career and the Surrealism that he subsequently developed in Paris. Composed of numerous colourful, fragmented triangular shapes, the present work takes its inspiration from reality, yet is imbued with Yun Gee’s psychological metaphors and surreal narratives – a major characteristic of Diamondism.

Last but not least, it is worth noting that in the history of Chinese art, the majority of large works created by first-generation oil painters prior to the Second Sino-Japanese War era had either been damaged or destroyed, yet only Yun Gee’s Wheels: Industrial New York was able to withstand the test of time.

FOR MORE NEWS FROM SOTHEBY’S

Sotheby’s has been uniting collectors with world-class works of art since 1744. Sotheby’s became the first international auction house when it expanded from London to New York (1955), the first to conduct sales in Hong Kong (1973), India (1992) and France (2001), and the first international fine art auction house in China (2012). Today, Sotheby’s presents auctions in 10 different salesrooms, including New York, London, Hong Kong and Paris, and Sotheby’s BidNow program allows visitors to view all auctions live online and place bids from anywhere in the world. Sotheby’s offers collectors the resources of Sotheby’s Financial Services, the world’s only full-service art financing company, as well as the collection advisory services of its subsidiary, Art Agency, Partners. Sotheby’s presents private sale opportunities in more than 70 categories, including S|2, the gallery arm of Sotheby’s Global Fine Art Division, and two retail businesses, Sotheby’s Diamonds and Sotheby’s Wine. Sotheby’s has a global network of 80 offices in 40 countries and is the oldest company listed on the New York Stock Exchange (BID).