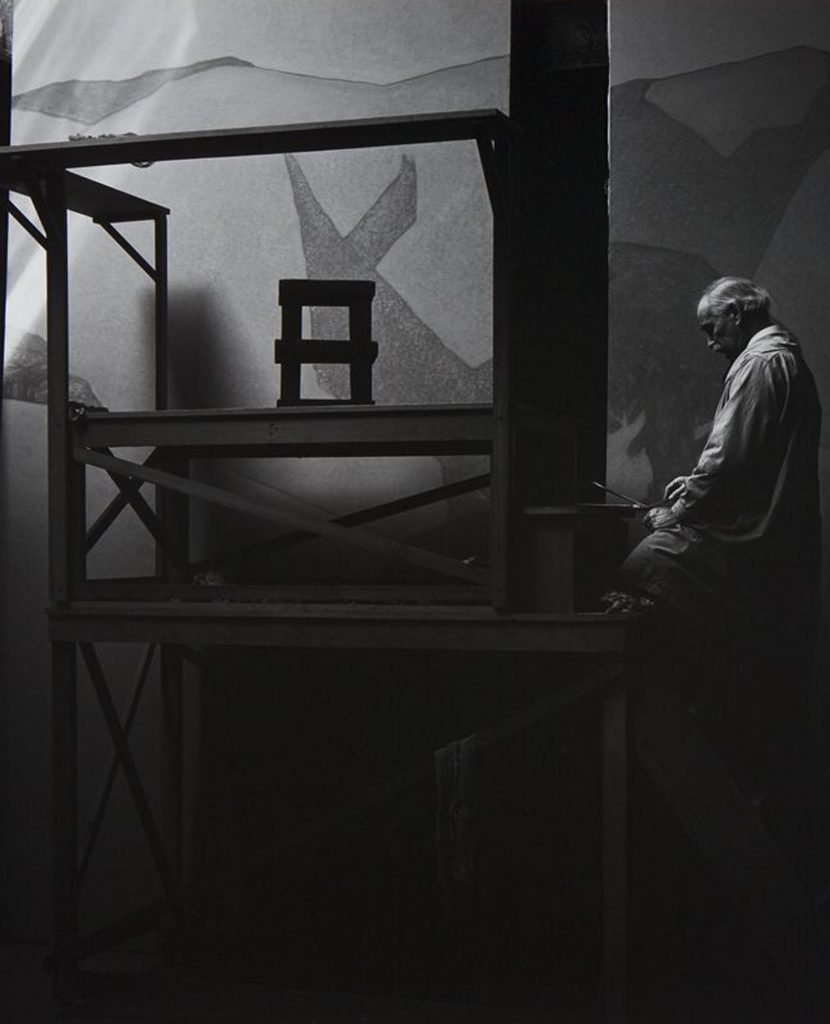 Gottardo Piazzoni photographed by Ansel Adams ~ 1932
Ansel Adams founded the Photography Department at the San Francisco Art Institute (California School of Fine Arts) in 1945.
It was the first program of its kind dedicated to exploring photography as a fine art medium.

Gottardo Piazzoni (1872-1945, Gottardo Fidele Ponziano Piazzoni, landscape painter and art educator).  Piazzoni was one of the teachers that Yun Gee had when he was in the California School of Fine Arts. From 1925 to 26 Yun Gee studied landscape painting with Piazzoni, who was a member of the Bohemian Club.

Piazzoni was born in the Italian-speaking region of Switzerland, and studied classics at the Locarno Gymnasium for his earliest art instruction. He and his family emigrated to America in 1887. He attended the California School of Design, from 1891 to 1894. He studied landscape painting with Raymond Dab Yelland and was inspired by his teacher Arthur Matthews, the young decorative master who had recently returned from France. 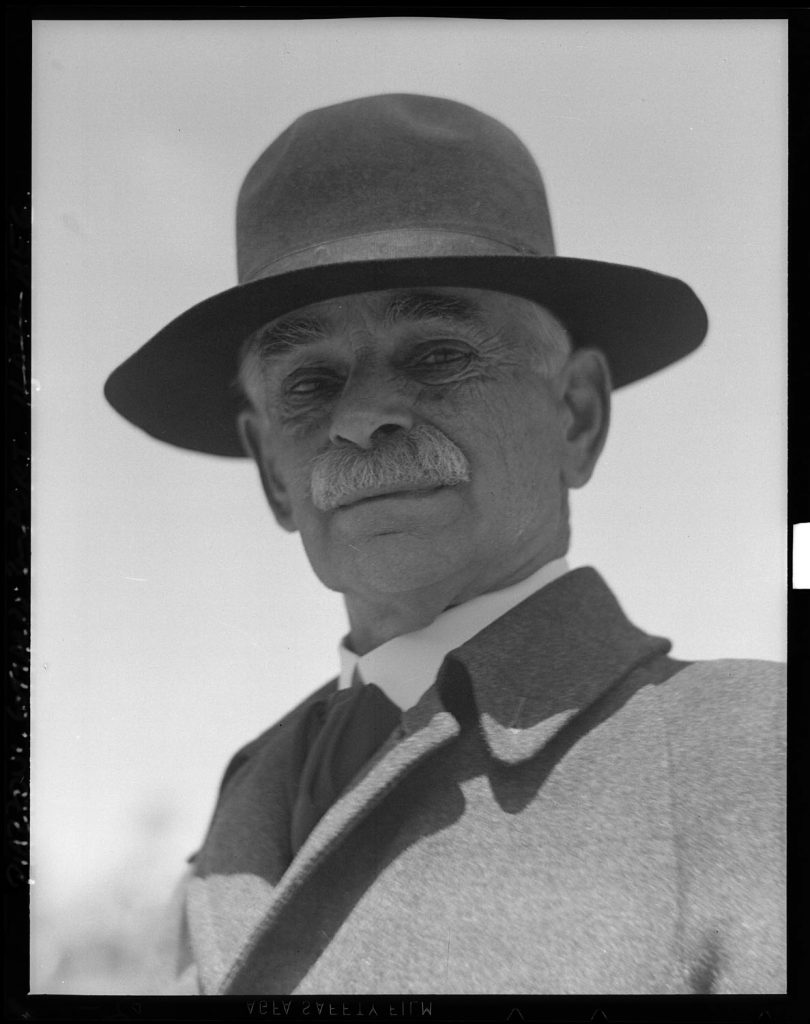 In 1895 Piazzoni went to Paris with his friend Maurice Del Mue and studied at the private academie Julien and the official Ecole des Beaux Arts. He roomed with the talented deaf California painter Granville Redmond.   In 1898 Piazzoni returned to California and joined the San Francisco Art Association. In 1900 he went back to Switzerland and later Paris where he roomed with Xavier Martinez. In 1901 he returned to San Francisco and began sharing a studio with the sculptor Arthur Putnam. 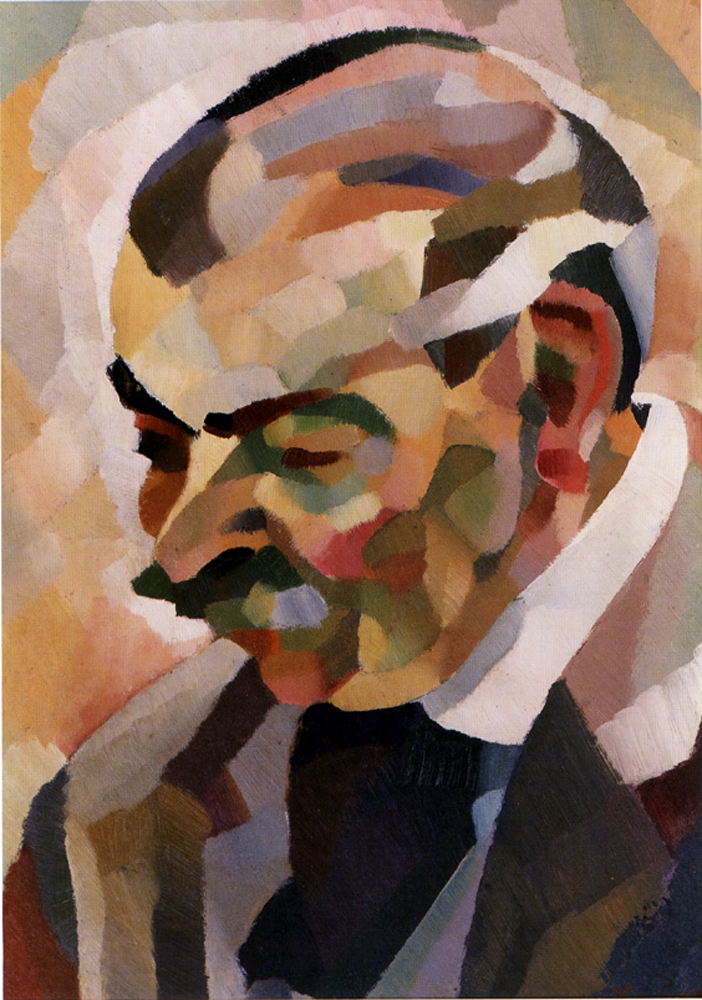 Yun Gee did “Portrait of Gottardo Piazzoni,” c. 1927, which was included in several solo exhibitions.

Of all the famous Early California painters who became indelibly associated with the Monterey Peninsula, Gottardo Piazzoni (1872-1945) was one of the few who was deeply rooted in the area from their youth.  He was born in Intranga, in the Italian-speaking region of Switzerland, and received his earliest art instruction at the Locarno Gymnasium, where he studied classics.  In 1887, he and his family emigrated to America, joining his father who had started a dairy farm in Carmel Valley with the proceeds of a fortune earned in Australia.  Growing up on a farm taught the young Piazzoni a respect for animals and a reverence for nature that would be the source of his artistic inspiration.

Like virtually every other Northern California painter of his generation, Piazzoni attended the California School of Design, in his case from 1891 to 1894.  He studied landscape painting with Raymond Dab Yelland and was inspired by his teacher Arthur Matthews, the young decorative master who had recently returned from France.  In 1895 Piazzoni followed the well-trod artistic path to Paris with his friend Maurice Del Mue. In the “City of Lights” he studied at the private Academie Julien and the official Ecole des Beaux Arts and roomed with the talented deaf California painter Granville Redmond.  He learned sign language and became life-long friends with Redmond.  In the summers in France, the Swiss-Californian painted in the countryside, gravitating naturally to the humble Barbizon approach to landscape painting. 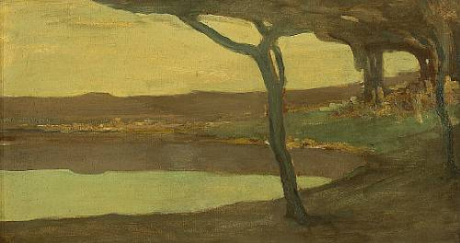 In 1898 when both his mother and brother died Piazzoni returned to California and joined the San Francisco Art Association.  In 1900 he accompanied his father to Switzerland where he remained with the artist’s two younger siblings. Piazzoni went back to Paris for a short time where he roomed with Xavier Martinez. In 1901 he returned to San Francisco and began sharing a studio with the sculptor Arthur Putnam. There he exhibited his works with the San Francisco Art Association, but in 1902 he led the California Association of Artists in breaking away from the well-established organization over exhibition politics and other policies.

Soon after the turn of the century Piazzoni began to develop his mature style of painting.  His artistic influences included his teacher Arthur Matthews, the short-lived Swiss Symbolist painter Giovanni Segatini (1858-1899) and most of all, the French Muralist Pierre-Cecile Puvis de Chavannes (1824-1898), whose compositions were strikingly spare for their day. Piazzoni’s art was informed and inspired by his Transcendentalist beliefs, biblical passages, the poetry of Dante or the poems of his friend, George Sterling (1869-1926).

Piazzoni developed a reductive approach to painting, creating works that used a harmonious palette and were elegant in their simplicity.  He usually relied on only a few elements in his pieces – the earth, sea and sky for example – and whether large or small in size, the works were big in vision.  Piazzoni used figures sparingly, usually for symbolic purposes, and he gave his works poetic titles that reflected his philosophy. Many of these paintings were inspired by the Monterey coast, where he loved to paint, or the family farm, nestled in the hills to its east.

Piazzoni had his first solo exhibition, apparently a rousing success, in 1905 at the Mechanics Institute Pavillion and he married Beatrice Del Mue, a fellow artist and the sister of his friend Maurice Del Mue.  After his wedding he and his wife joined Arthur Putnam and his wife on a two-year sojourn in Europe.  The artists returned to San Francisco after the devastating earthquake, which had taken their studios.  Upon his return Pizzoni received his first mural commission, for the new First National Bank Building, which was being built in the flurry of new construction in the wake of the tragedy of 1906.  He was perfectly suited to be a muralist because his philosophy was for the art to become part of the building, to be in harmony with the architecture, ideals that were held by the “American Renaissance” movement of the day.

Landscape with Cypress Tree – Collection of University of California, Berkeley

In 1914 he painted “Lux Aeterna,” which is Latin for “Eternal Light,” a composition that was inspired by Dante. The following year this iconic painting appeared in the Panama Pacific International Exposition, the fair that celebrated San Francisco’s rebirth from the 1906 catastrophe. In 1915 he received another major mural commisson from collector Andrew Mattei of Fresno for four huge panels: “The Sea,” “The Land,” “Monterey Coast,” and “The Spirit of the Night.”

His final great work was another mural commission that came in the 1920s, this time for the San Francisco Library.  He worked for years on ten epic panels for the second floor loggia, five paintings dedicated to “The Land” and five to “The Sea,” which were completed in 1932.  The aging artist finished another smaller cycle of murals for the library in 1945, just before his death.  The large cycle is now in the M.H. DeYoung Museum in San Francisco in a special gallery that was created for them, while the smaller group are on loan to the California State Capitol in Sacramento.  Gottardo Piazzoni was one of Northern California’s greatest painters and throughout his career he stayed true to his poetic maxim that “nature is a revelation of God, art is a revelation of man.”